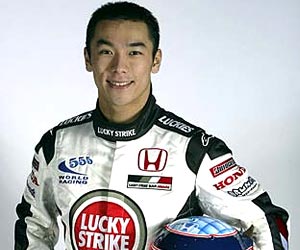 Takuma Sato, most successful F1 driver of Japan, is known for his pure pace. All through his career, he has impressed people with his pure pace. Thanks to his persona, he has won his own group of loyal fans. Sato was born in Tokyo in 1977.

Career
Racing career of Sato began as a cyclist. In 1996 he bought a car with his hard-earned money. He won Honda’s Suzuka Racing School Scholarship. However, he turned down the chance to drive in Japanese Formula Three and instead headed for Europe where he thought he could build his racing career.

Sato debuted as a single-seater at the UK’s Snetterton circuit, the first of several Formula Vauxhall Junior outings with Diamond Racing. With the same team he graduated to Formula Opel. In EFDA Formula Opel Euroseries he finished sixth. Same year he also participated in the British Formula Three championship and won the AF2000 support race at the Macau Grand Prix. As the result he got the full-time British F3 berth for 2000.

He finished third in the championship and won in the Spa round of the French F3 series. He was now in sight of Formula One teams. That year he tested for both BAR and Jordan. BAR signed him as an official tester for 2001. Honda were the engine suppliers of BAR. These were the starting days of Sato’s long contractual relationship with Honda.

Apart from fulfilling his F1 testing commitments, Sato kept on participating in Formula Three events. In the British title, he had record 12 wins from 13 races. He tasted victory in the Marlboro Masters at Zandvoort and the international support race at the British Grand Prix. He also performed well in Macau Grand Prix.

Impressed by his performances, Jordan signed him as test driver for 2002. However, though he scored points for his team, these were not enough to secure his berth. For 2003 he moved to BAR as the third driver. However, miserable performance left him being dropped by BAR in 2005.

Sato joined new Honda-powered team, Super Aguri in 2006. Though he struggled in early races, he finished tenth at the final round in Brazil. In 2007 Sato secured team's best ever qualifying result of tenth place for the Australian Grand Prix in the championship. In the Spanish Grand Prix, he finished eighth.