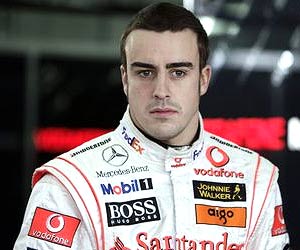 Fernando Alonso Díaz, a Spanish Formula One racing driver, is a two-time world champion. He is the second F1 driver, after Michael Schumacher, to score at least 100 points for three consecutive seasons. He acts as a Goodwill Ambassador for UNICEF and is one of the leading figures of the Grand Prix Drivers' Association.

Personal Life
Fernando Alonso was born at Oviedo, Asturias in Spain. The date was July 29, 1981. His father was employed as a mechanic in an explosives factory near Oviedo while his mother worked in a department store. His father had been an amateur kart racer and Fernando got his interest in racing in jeans. Fernando currently lives in Oxford, England.

Professional Career
Fernando learned karting with the homemade kart and national competitions followed it. In 1992 he grabbed the first of five Spanish karting championships. He got an offer to drive in Formula Nissan. Tempted by the offer, Alonso joined ex-Formula One driver Adrian Campos’s team. He clinched the title, proving it was easy for him to change gears.

A F1 One test with Minardi secured him his first Formula One race drive with the team. Impressed by his performance with Minardi, Renault signed him as a test driver for 2002.

Fernando made a mark with his raw speed and fierce commitment. As a result, he was promoted as a race driver for 2003. Alonso created history. At young age of 22, Alonso became the youngest-ever pole sitter in Malaysia and then the youngest Grand Prix winner with a maiden victory in Hungary. In 2005, Alonso claimed the driver's crown with two races left. He won his second successive title at Schumacher’s expense during the German’s final season.

Fernando is the first man since Juan Manuel Fangio to score successive championships with different teams. In 2007 he drove for McLaren. He had intense professional rivalry with his team mate Lewis Hamilton. His relations with team members became strained for several reasons. And he decided to sever his relation with McLaren.