Here is information on Nick Heidfeld, a Formula 1e driver. During his F1 career, he made the record of the highest number of world championship points without a Grand Prix win.
Formula 1 » F1 Drivers » Nick Heidfeld 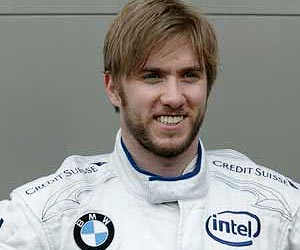 Professional Career
Nick Heidfeld started his racing career with karting. Gradually he raised his profile in local club events and national competitions. Heidfeld gpy a drive in the 1993 Formula A world championship in Laval. His natural speed earned him a drive in the German Formula Ford 1600 class. With eight wins from nine races, he clinched the 1994 title. He repeated the achievement in International German 1800 class. When aged 15, Heidfeld became the youngest-ever competitor in German Formula 3. He clinched three wins in 1996. In his second year, he bagged the title. He also began testing with McLaren.

Heidfeld was focused on the International Formula 3000 championship. Second place in his first season became complete domination in his second. He clinched four wins to take the 1999 title. Eventually he was signed by Prost Formula One team as a race driver for 2000. However, Heidfeld failed to finish 11 of 17 races that season. This was his worst campaign since launching his single-seater racing career seven years earlier. For 2001, Heidfeld headed for Sauber. Heidfeld got his first podium there. He got 12 points in 2001 while in 2003, he bagged six points.

For 2004, Heidfeld moved to Jordan. However, the move brought little fruits for him. His only point-scoring results were eighth in Canada and seventh in Monaco. His next stop, in 2005, was BMW Williams. Partnering with Mark Webber, he achieved his first pole position and also got two second-placed finishes. Ahead of the 2006 season, BMW split with Williams. Heidfeld returned to Sauber team, which was now owned by BMW.

Heidfeld rose as the team’s lead driver, scoring 23 of their 36 points. Heidfeld raised his game and qualified in the top ten in all of the last six races. He occupied the BMW-Sauber partnership’s first podium with a spectacular third place in Hungary. In 2007, his performance was impressive and faultless.