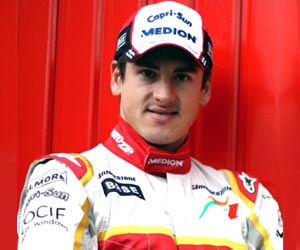 Adrian Sutil, a Formula 1 driver, is currently associated with Force India team. Born on January 11, 1983 in Starnberg, Germany, Sutil is a talented driver and is expected to become a big star in future.

Professional Career
Adrian Sutil's first love was not a racing track but the concert hall. It was sheer chance when he did karting at the age of 14. He loved the sport so much that he decided to make the sport his career. Sutil worked hard and became an expert karting driver. After performing well in regional karting series, Sutil arrived on national stage. He took third in the German Championship and also performed well at the highly-competitive European championship. For 2002, he exited karting and moved into single-seaters.

In Swiss Formula Ford series, Sutil was dominant. He won all ten Swiss events, while also bagging five victories in the Austrian Formula Masters tournament. In 2003, he participated in Germany’s Formula BMW series. Though he did not win a race here, he succeeded in getting three podiums. The performance got him a berth in the prestigious F3 Euroseries. While driving here, he developed long and fruitful relationship with Collen Kolles, future Spyker team boss.

Ambitious Sutil decided to join more competitive ASM team. He kept occupying the racing seat with Lewis Hamilton, a future F1 star. Sutil ended year 2005 as second best, with two wins under his belt. This performance, as much as the backing of Kolles who was now Midland team boss, landed him a Formula One testing contract with Midland for 2006. At the European, French and Japanese Grands Prix, Sutil had three impressive Friday practice outings.

Keeping his testing commitment, Sutil competed in the 2006 Japanese F3 championship. Here he got a confidence-boosting first title. For 2007, he was promoted as a race driver for Spyker, formerly Midland. With just five seasons of single-seater racing experience, he got a Formula One racing berth. Justifying the faith shown in him, the driver scored P1 in Monaco.