Know about the career and achievements of Kimi Raikkonen, a driver in Formula 1. Find out what he has achieved during his F1 professional career.
Formula 1 » F1 Drivers » Kimi Raikkonen 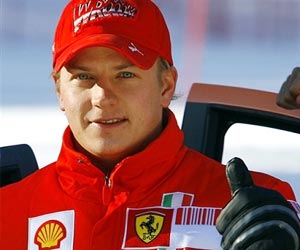 Kimi Matias Raikkonen, currently driving for Scuderia Ferrari, is a F1 race driver. He was born on October 17, 1979 in Espoo, Finland.

Professional Career
Kimi Raikkonen was interested in karting from tender age. He took part in national karting competitions and impressed everyone but surprisingly, he never won a title in these. However, he was declared by the experts a future star. Raikkonen made the switch to single-seaters in 2000. Picking up the UK Formula Renault series as his springboard, he grabbed seven wins, 316 points and six pole positions. He was so dominant that year that several Formula One teams began to woo him.

Raikkonen enjoyed his first taste of victory in Malaysia. With ten more podiums he was within two points of upsetting Michael Schumacher’s run of drivers’ titles. At the start of 2004 Kimi retired from all three opening races. After partner Coulthard's exit, he made a pair with Colombian Juan Pablo Montoya. Slowly the pair gained momentum and Raikkonen ultimately enjoyed five poles, five podiums and seven wins. But, in the title chase, Renault and Fernando Alonso retained the edge, leaving Raikkonen to finish runner-up for a second time in three years.

In 2006, Raikkonen scored in every race he finished. Raikkonen moved to Ferrari for 2007, for replacing Schumacher. He won on his Ferrari debut in Australia. He regained the championship lead in the last round and stole the driver's title, leaving McLaren watching with astonishment.