Robert Kubica has successfully made his mark in Formula 1. During his F1 career, he has impressed everyone with his achievements.
Formula 1 » F1 Drivers » Robert Kubica 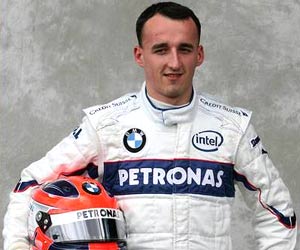 Robert Kubica is a Polish race driver competing in F1 championships. He is from a place not having a rich tradition of producing race drivers, and yet he has been able to make his mark. Robert Kubica was born on December 7, 1984 at Krakow in Poland.

Professional Career
Robert Kubica started his racing career in the karting tracks of Poland. He had won six domestic karting titles, when he decided to head to Italy to test his skills. A competitive factory team signed him and in 1998 became the first non-Italian to win the Italian championship. He got second place in the European series and victory in the prestigious Monaco Kart Cup. He reclaimed the Italian crown in 1999, and added the German title and the Elf Masters.

Kubica graduated to Formula Renault in 2001. In his second season he brought four victories and second place overall. For 2003 he competed in the Formula 3 Euro series and won his debut race at the Norisring. He made his mark in Macau, finishing second and setting the fastest lap in the 2004 Grand Prix. In the 2005 Renault World Series, Kubica grabbed four victories, 11 podiums and three pole positions before being declared champion. He got his opportunity as a Renault Formula One test in December at Barcelona. His debut season was quite impressive. BMW Sauber offered him a contract as third driver for 2006.

Kubica became a regular feature both in testing and Friday practice session. When racer Jacques Villeneuve pulled out of the Hungarian Grand Prix, BMW substituted him with Kubica. He performed well, but a technical snag in his car prevented him from scoring his first point. Kubica claimed his first podium in Italy. He claimed six points from six Grand Prix in 2006. The team retained him in 2006 and 2008.