Know here about Mark Webber, a Formula 1 driver. Find out how his F1 career progressed and what he achieved during his long association with Formula 1 racing.
Formula 1 » F1 Drivers » Mark Webber 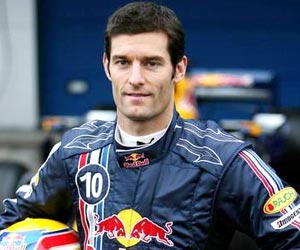 Mark Webber, an Australian F1 driver, is currently associated with Red Bull. He was born on August 27, 1976 in Queanbeyan, New South Wales in Australia.

Professional Career
Mark Webber arrived on the racing stage aged 14. He first tried biking but later decided to make his career on four-wheeled machines. In 1994, he appeared in the Australian Formula Ford championship. His first victories in the championship came in 1994. In the support race for the Australian Grand Prix, he had a memorable win. At the 1995 Formula Ford Festival in the UK, Webber was placed third. In the 1996 British Formula Ford championship he scored a Van Diemen drive. He won four races on his way to the series’ runner-up slot. For the ’96 Festival, he returned to Brands Hatch.

In 1997, Webber took part in British Formula Three. He took fourth place in the championship. Impressed by his success, Mercedes AMG sportscar squad signed him up for the 1998 FIA GT championship. Webber teamed with reigning world champion Bernd Schneider and had five victories. A win, three podiums and third in the championship came in Webber's account. Now, with the help from Arrows boss Tom Walkinshaw, Webber got Formula One tests. Flavio Briatore and Benetton contracted Webber as test and reserve driver for 2001. He kept on competing in F3000 for the Super Nova squad. Although he finished second in the title race to Britain’s Justin Wilson, he got a 2002 race seat with Minardi.

On his Grand Prix debut, he got a fifth-place finish. All through the season, he continued surpassing his team mate Alex Yoong and performed better than people expected. In 2003, Webber moved to Jaguar. Beating expectations, Webber qualified an amazing third in both Brazil and Hungary. He scored 17 of Jaguar’s 18 points that season. He retained his Ford-associated team for 2004. Webber qualified in the top six on three occasions. In the year, he could score just seven points.

For 2005, Webber decided to drive for Williams. But 36 points and in tenth in the championship was less that Webber had expected. Webber remained with the British squad in '06. However, he retired for eleven times and had a lackluster seven point tally. For the 2007 season, Webber joined Red Bull. However, Webber failed regularly to translate his top-ten qualifying performances into points.