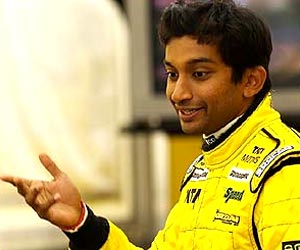 Narain Karthikeyan is till date only Indian driver to participate in Formula 1 championship. Born on January 14, 1977 in Coimbatore, India, he is currently an A1 GP driver. He made his debut his F1 in 2005 with the Jordan team. He served as test driver for Williams F1.

Non-F1 Career
Narain started his career with a bang. He reached the podium in his first ever race, at Sriperumpudur in a Formula Maruti. Thereafter he decided to train himself in a regular racing school. He joined the Elf Winfield Racing School in France. He reached the semi-finals in the Pilote Elf Competition for Formula Renault cars in 1992. In 1993, he participated in Formula Maruti in India. He also took part in the Formula Vauxhall Junior championship in Great Britain. In 1994, he raced in the Formula Ford Zetec series. as the number two works Vector driver for the Foundation Racing team. In a race held for supporting the Portuguese Grand Prix he reached the podium. He also won the British Formula Ford Winter Series. He became the first Indian and the first Asian to win the Formula Asia International series. In 1997, he competed brilliantly in the British Formula Opel Championship.

He debuted in the Formula Three Championship with the Carlin Motorsport team in 1998 and impressed everyone. He continued for 1999, finishing on the podium five times. He also had to his credit two pole positions and three fastest laps. In 2000, he finished fifth in the British F3 Championship. His performance was also noteworthy at the Korean Super Prix, Spa-Francorchamps and the Macau Grand Prix.

In 2001, Karthikeyan finished the year among the top ten in the Formula Nippon F3000. That very year, he became the first Indian to ever drive an F1 car, testing for the Jaguar Racing team at Silverstone. In 2002, he moved into the Telefonica World Series, setting the fastest non-F1 lap time at the Interlagos Circuit in Brazil. In 2003, participating in the renamed Superfund Word Series, Narain performed fantastically to finish fourth in the championship. His performance earned him a Formula One test drive with Minardi. In 2004, he bagged victories in Valencia, Spain and Magny-Cours, France, driving in the Nissan World Series.

Karthikeyan in F1
Narain Karthikeyan signed the preliminary deal with Jordan Formula One team on February 1, 2005, making him first Indian F1 driver. However, he was a rookie driver, meaning he paid for his place in the team. In the Australian Grand Prix, his first race, Karthikeyan qualified in 12th position. He had his first points in the 2005 United States Grand Prix. Besides the USGP, his best place was eleventh. At the end of 2005, he crashed his Jordan at the Chinese Grand Prix in Shanghai. Fortunately, he did not suffer any injuries.

In December, 2005, Karthikeyan tested successfully for Williams who confirmed him as their fourth driver. For 2007, he signed a new contract with Williams-Toyota, as secondary test driver.