Here is information about Felipe Massa, who has quite impressive record in F1 championships. You can know here about career of Felipe Massa, currently driving for Ferrari.
Formula 1 » F1 Drivers » Felipe Massa 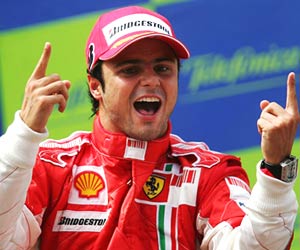 Felipe Massa, a Brazilian F1 driver, is someone with inherent driving talent. Currently employed by the Ferrari team, he is under contract to work for them until 2010.

Personal Life
Felipe Massa was born in Sau Polo of Brazil on April 25, 1981. He spent his formative years racing karts in his native Brazil. He married Anna Rafaela Bassi on November 30, 2007.

Professional Career
Felipe Massa made his debut in the Brazilian Formula Chevrolet Championship and won the series in the following year. Thereafter he won the 2000 Italian and European Formula Renault championships. He earned himself his first Formula One tests with Sauber team. He made his Grand Prix debut in Melbourne, qualifying inside the top ten.

He gathered his first championship point with sixth place in Malaysia. He scored another three that season. On Peter Sauber's advice, he spent the following season testing for the team’s engine suppliers, Ferrari. He rejoined as Sauber’s race driver on a two-year contract for 2004. His best result was fourth place in Belgium. He performed well in 2005. He scored 11 points and outpaced his teammate Jacques Villeneuve through most of the season. Thanks to his consistent good performance, he was gifted his race car.

In 2006, Massa joined Ferrari. Here he got the opportunity to partner the legendary Michael Schumacher. He scored first points with Ferrari getting fifth place at round two in Malaysia. He got second places in the US and Germany, before capturing his first Formula One victory in Turkey. Massa was retained by Ferrari for 2007 to partner Kimi Raikkonen, replacement of Schumacher. He was atop the time sheets on five occasions and set the fastest lap for four circuits during the 2007 pre-season testing. However, the beginning of the season was not very good for him. But he succeeded in winning the Grand Prix championships of Bahrain and Spain, and was third in Monaco. He also won Turkish Grand Prix and finished second in Brazilian Grand Prix.

In 2008, Massa scored his first points in Bahrain where he bagged his first win of the season. Massa's win at Istanbul Park was his third successive win at the venue. Massa won the 2008 European Grand Prix at Valencia in Spain. He won his 10th Grand Prix championship in the 2008 Belgian Grand Prix.