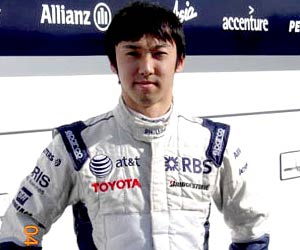 Kazuki Nakazima, currently associated with Williams-Toyota team, is a F1 race driver from Japan. Born on January 11, 1985, he was raised in the Japanese city of Aichi. He is the son of famous Japanese driver Satoru Nakajima.

Professional Career
Kazuki began his professional career at the age of 11 under his father's tutelage. Within three years, he rose as the Suzuka Formula ICA karting champion. He participated in a variety of karting championships honing his driving skills in the process. Impressed by his performance in karting championships, Toyota invited him to its young driver's program. In 2003 he won the Formula Toyota series. He moved to Japanese Formula Three in 2004. He won two races first year and stuck around for second season. Eventually he finished as runners up. This performance was spectacular because, at the same time, he was competing in selected events of Japanese Grand Prix.

In 2006 he decided to showcase his talent outside Japan, participating in the Formula 3 Euro Series. Performing well, he won one race. Toyota-engined Williams team invited him as an official tester for 2007. In the December test at Jerez, his performances were impressive. He was called to the first race of the 2007 Formula One season in Melbourne as Williams Friday driver. He made a further five Grand Prix practice appearances.

While performing his duties for Williams, Kazuki kept driving in the GP2 for the DAMS squad, clinching six podiums and one pole position. On the retirement ofWilliams race driver Alexander Wurz, Kazuki was promoted as a race driver for Brazil race finale. On his racing Formula One debut, he performed well finishing tenth and scoring the fifth fastest lap of the event. Williams decided to retain him for 2008.