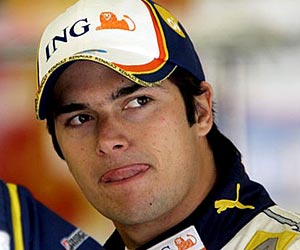 Nelson Piquet Junior is a Brazilian F1 race driver currently associated with Renault Formula 1 team. He is the son of Nelson Piquet, three-time Formula One world champion and one of Brazil's most successful F1 drivers. Nelson Jr was born on July 25, 1985 in Heidelberg, Germany.

Professional Career
Nelson started his motor racing career in karting at the tender age of eight. A driver of natural talent, he grabbed the Brazilian kart championship thrice. He switched to single-seaters in 2001 and debuted in the South American Formula Three championship. He finished his maiden season with one victory and four podiums. In his second year, he won thirteen races.
With a national Formula Three title, Nelson moved to the United Kingdom to drive in the British series in 2003. In his debut season, he clinched six victories and finished third. His success got him two Formula One tests with Williams over the winter period. He won the tournament in his second British Formula Three season in 2004. During the competition he won six races and beat Adam Carroll and James Rossiter. Thanks to the title, he came onto the radar of sports administrators.

Riding on his performance, Nelson got two Formula One tests with Williams over the winter period. He won British Formula Three championship in 2004. Winning six races, he went past Adam Carroll and James Rossiter. In February 2005 he was invited by BAR to test in Jerez. In 2005 he participated in not just the inaugural Grand Prix Two season but also A1 Grand Prix, driving for the Brazilian team. He bagged one victory in GP2 and two wins in A1 GP.