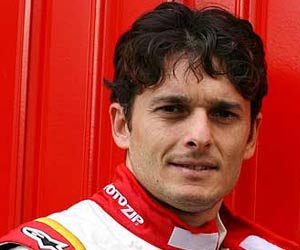 Giancarlo Fisichella, an Italian F1 race driver, is currently driving for Force India team. He was born on January 14, 1973 in Rome, Italy.

Professional Career
Giancarlo had proved his racing potential at early age. He performed brililliantly in the Italian karting ranks. However he missed two European titles and a world championship. In 1992, he entered single seater competitions. During his debut at Imola, he scored a maiden win. During second season, he was the championship runner-up while in the third, he secured the title. Formula One teams took notice of his success.

Minardi signed Giancarlo Fisichella as a tester in 1995. While testing for them, he kept racing for Alfa Romeo in the International Touring Car Championship. He continued the commitment in 1996. During the year, he had several testing sessions with Minardi. He had eight Grand Prix outings for Minardi and his impressive performance landed him a more competitive assignment with Jordan.

Giancarlo performed well in his Jordan campaign and overshadowed team mate Ralf Schumacher. Podiums in Canada and Belgium carried Fisichella to a 20-point haul. He finished eighth in the championship, three places above Schumacher. For 98, Giancarlo was transferred to former champions Benetton. The team was going through a difficult phase that time. Giancarlo's best championship result was sixth. For 2002 he returned to Jordan. The season has mixed return for the driver. He had to retire from several races. However, he tasted his first Formula One victory with Jordan. Although the event was rain-swept, a victory is after all a victory.

This win gave him the boost he needed. Season 2004 with Sauber turned positive for him. For 2005, he was recalled by Renault (Former Benetton). However, Giancarlo was completely overshadowed by Fernando Alonso, a young but extremely talented driver. In 2006 and 2007, he was outgunned by both his colleagues and rivals. It seemed that his career is coming to an end.

But Force India had other plans. The team signed him in early 2008 for a race seat, hoping that his twelve years experience would bring fruits for them.