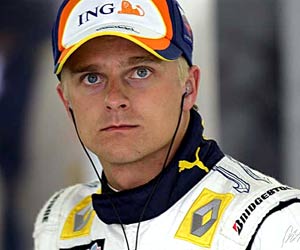 Heikki Kovalainen, a F1 driver, is under contract with McLaren until 2009. He holds the distinction of being the 100th driver to win a Grand Prix. Born on October 19, 1981 in Suomussalmi, Finland, he has followed the footsteps of Finnish forebears.

Professional Career
At the tender age of ten, Heikki started participating regularly in national and international karting events. In 2000, he won the prestigious Elf Masters kart race at Bercy. He was named Finland’s ‘Driver of the Year’ the same season. In 2001, he participated in 2000 Renault series. In his debut season he won two races and got Rookie of the Year honours. Kovalainen was now signed to Renault’s driver development programme. He moved to British Formula Three to race in a Renault-powered car. He finished third in the championship and had five wins to his name. His performance was impressive at the Marlboro Masters at Zandvoort and the Macau Grand Prix.

Heikki now desperately wanted to win a championship. He took part in the esteemed World Series by Nissan. He was second in 2003 and in the following year, he claimed the title. The Nissan crown opened several doors for Heikki. He was invited to test eight times for Renault, and he impressed everyone with his natural speed and strong technical feedback. In 2004’s Race of Champions, he defeated Michael Schumacher.

In 2005, Kovalainen signed to drive in GP2, for he was aspiring for Formula One. He won several of the opening rounds but eventually ended as runner-up. Kovalainen was given a full-time testing role with the French team for 2006 season. In this role, he got the chance to hone his skills further.

In 2007, he got something what hundreds of drivers wish all their career. He filled up the seat vacated by McLaren-bound world champion Fernando Alonso. He justified the faith of the team bosses by getting the only podium finish of the season.