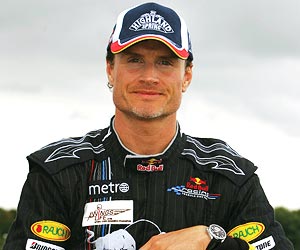 David Coulthard, currently driving for Red Bull, is a F1 race driver from Scotland. Thanks to his long career, he lies fourth on the all-time scorers list. Till date he has won thirteen Grand Prix events. He is due to retire after 2008 season.

Professional Career
David Coulthard began his racing career with karting. After winning a series of Scottish championships, he appeared for Formula Ford in 1989 and finished third. Paul Stewart Racing picked him for the 1990 Formula Vauxhall-Lotus series. This very year he got the prestigious McLaren/Autosport Young Driver of the Year Award. Coulthard's next appearance was at the British Formula Three series. He proved his worth with victories in the Macau Grand Prix and the Marlboro Masters. Next were two years in Formula 3000. During the first year, he tested for Benetton while in the second he performed as an official Formula One test driver for Williams team.

Tragic death of Williams’ race driver Ayrton Senna at Imola prevented him from staying throughout the 1994 season. Coulthard stepped into the shoes of Great Brazilian. Had a fault in his car not forced him to retire, he would have got a podium in his Grand Prix debut. However, Williams asked him to share the racing seat with experienced Nigel Mansell. Coulthard bettered his partner in the driver's standings. Williams retained Courthard for 1995. He had a debut win in Portugal and came third in the championship.

In 1996 Coulthard decided to join McLaren. Coulthard's finest hour with McLaren came in 2001 season when he challenged Ferrari’s Michael Schumacher for the title. After the retirement of Hakkinen, Coulthard came under the shadow of Kimi Raikkonen. Over the next two years Coulthard scored mere 75 points to the Finn’s 136. Coulthard was feeling frustrated with McLaren and in 2005, he decided to join Red Bull. His first season with Red Bull was average. Next year Coulthard took third place in Monaco giving Red Bull their first podium of the season. Next season he got the podium for his team at Canadian Grand Prix. At Silverstone, his home race, he announced his plan to retire at the end of 2008