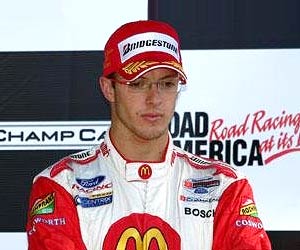 Sebastien Bourdais is a French F1 racing car driver. Born in Le Mans on February 28, 1979, he tasted resounding success in Champ Car World Series. He has recently been signed by Toro Rosso for Formula 1.

Professional Career
From early age, Sebastien Bourdais had decided to build a career in motor sports. When he was just twelve, he became a regional champion in karting. When 14, he clinched the national title. Now he decided to switch to single seater racing. His first race was the 1995 Formula Campus series where he ended ninth. He now switched to Formula Renault. He ended seventh overall and stayed on for a second season. Working hard Bourdais gained enough experience there to enable him to compete well in French Formula Three. He had a successful first season and was named rookie of the year. In 1999, his second season, Bourdais had eight victories on his way to the title. However, his move to F3000 was not that productive. Bourdais had just one podium with the Prost team.

Bourdais' ambition was to enter Formula One drives. And he knew that he had to perform well in F3000. In 2001 he moved to DAMS team. He had his first series win at Silverstone. In 2002, he had three wins and eight podium finishes, enabling him to clinch the title. Bourdais was now seen as a potential Formula One prospect. Successful testing for Arrows brought him a Formula One race seat for the 2003 season. However, Arrows went bankrupt and Bourdais lost his chance. He tested for Renault but lost the racing seat to Fernando Alonso.

Bourdais now moved to hugely competitive Champ Car series in North America. Associated with Newman-Hass Racing Team, Bourdais took pole position in his first two races and won his fourth. With two further victories and another four podiums he was named rookie of the year. His performance continued the next season. With seven wins and 10 podiums he won the championship. Bourdais also won the 2005, 2006 and 2007 titles of the championship. However, his ultimate aim was still Formula One.

During the ’07 season, he tested for Torro Rosso. After several sessions, the Italian squad signed him up for a 2008 race seat.