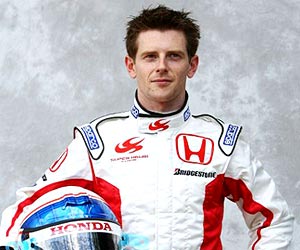 Anthony Davidson, a British Formula One driver, is currently a test driver for Honda. He has been a race driver for Super Aguri. Davidson was born on 18 April 1979 in Hemel Hempstead, Hertfordshire, England.

Professional Career
Davidson began his career aged eight in karting. His hobby soon became a career for him. Over the next 12 years he participated in numerous races. He turned professional in 1997 when he joined the Italian Biesse team. He moved to single-seaters in 1999. He won his first six Formula Ford races, all of these from pole position. At the end of 2000 he won in Formula Ford Festival. McLaren/Autosport awarded him the title of Young Driver of the Year. BAR Formula One team selected him for their young driver's program.

In British Formula Three for 2001 Davidson finished runner-up to Sato with six wins and seven poles. He performed well in F3 Euro Cup series winning at Pau and Spa. He got his first Formula One test with BAR at Mugello in Italy. For 2002 he was signed by the team as test driver.

David debuted in F1 race at the Hungarian Grand Prix with Minardi, the first of his two outings for the Italian team. However, he qualified last in both races and retired on both occasions. Until 2006 he continued working as the main driver for BAR. Only in 2005 Malaysian Grand Prix, he participated as a race driver.

For 2006, Davidson had hoped to be selected as a race driver. Davidson joined Super Aguri, who game him and Sato an opportunity to renew their old F3 partnership. Although Sato dominated the proceedings, Davidson followed him closely.