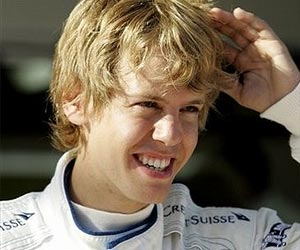 Professional Career
Vettel started his career in 1995 at a local kart track in his native Germany. He won several regional championships and then migrated to the European level. Attracted by the German's exploits, Red Bull signed him for their young driver programme in 1998. In 2000 Vettel was invited to join the Red Bulls’s junior team. After some time, Vettel switched to single-seater racing when he debuted in the hugely-competitive Formula BMW series in 2003. Vettel scored five wins and ended the season second in the event. Vettel was better in his second season, taking 18 victories from 20 events. Stunning everyone, he took the title with a massive 124-point advantage.

Now Vettel decided to move to the Formula 3 Euro Series. However, he maintained his strong links with BMW. During two F3 seasons, he failed to take home the title. Yet, BMW Sauber was confident of his talent and he was the first choice to replace third driver Robert Kubica, who had been promoted to a race seat.

Vettel was waiting for the opportunity. He left his impression when he finished his first practice session on top of the timesheets. His successful Friday outings meant that BMW Sauber retained Vettel for 2007. Apart from fulfilling his testing commitments in Formula One, Vettel performed impressively in the World Series by Renault. In the US Grand Prix at Indianapolis, he stood in for injured Kubica. He became the youngest man ever to score a world championship point. His reward was a full-time race seat with Toro Rosso which he retained in 2008.