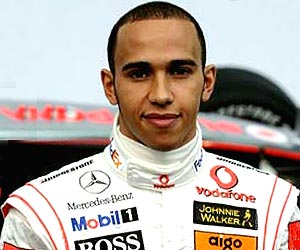 Lewis Hamilton, long associated with McLaren Mercedes team, is a British Formula 1 racing driver. He comes from a mix race background and is often labeled first black driver in F1 championships. Lewis has had an impressive career since his debut in the racing track.

Personal Life
Hamilton's parents decided to separate when he was two. For ten years, he lived with his mother and half sisters. At twelve, he started living with his father. In 1991, his father brought for him a radio-controlled car. This led to Hamilton sampling kart racing. His father fully supported his son in racing. While working hard to arrange money for his son, he also worked as his manager. During his school days, Hamilton also played football and cricket.

Professional Career
What started as a hobby for Lewis Hamilton soon became his vocation. At tender age of ten, he became the youngest-ever winner of the British Cadet Kart championship. Lewis won a slew of karting races and this came to the notice of McLaren which signed Hamilton in 1998 to the team’s young driver programme. Supported by McLaren financially, Hamilton won a multitude of European karting titles.

Hamilton became the sport's youngest number one. In 2002 Hamilton opted for the highly-competitive British Formula Renault series. He finished third in his debut season, before clinching the crown a year later after a record-breaking 10 wins, nine fastest laps and getting 11 poles.

However, Formula Three Euroseries was less straightforward. In the debut year, Hamilton was fifth in the standings and won the title in the second year. Hamilton had 15 race wins to his name. At Grand Prix 2 in 2006, Hamilton impressed the onlookers with a string of spectacular performances. He won the title as well as the admiration of the people.

Hamilton's long time employer McLaren were impressed by his continuous exploits. They made him their race driver for Formula One with Fernando Alonso. Hamilton won four Grands Prix in his debut season and led the championship for much of the season. Sheer bad luck deprived him of the title. Opportunity is bound to visit Hamilton again.