Know about the achievements of Jarno Trully in Formula 1 tracks. Find out about his F1 career in his brief biography here.
Formula 1 » F1 Drivers » Jarno Trully 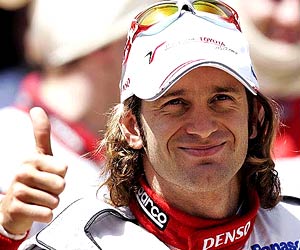 Jarno Trully, a Toyota F1 driver, has experience of more than a decade in race driving. Among the most talented people on the grid, he had made fans all over the world with his screeching speed. John Trully was born on July 13, 1974.

Professional Career
Trully began karting at the age of ten. By 1995 had won just about every title of karting. He made the switch to single-seaters in the 1995 German Formula Three series when he was offered free drive. That year he got two wins from six races. In 1996 he dominated the series to emerge champion. He was now under the patronage of the Benetton Formula One team.

He was now offered the chance of a Grand Prix debut with Minardi in Australia. His performance was fine in his early outings. However, he was invited to join Prost mid-season to stand in for the injured Olivier Panis. At Nurburgring, he finished fourth and performed in Austria sensationally before retiring. In the wet 1999 European Grand Prix, he took second place. He joined Jordan for 2000 and qualified impressively at Monaco and Spa. Despite good starts, he was unable to better fourth place in these competitions.

For 2002, Trully joined Renault. Team mate Jenson Button outscored him and he failed to add to his podium tally. In 2003 he had Fernando Alonso as his team mate. He scored his first podium in four years with a third place in Hockenheim. Trully had the best time of his career in the beginning of 2004 season. He regularly gathered points in the season and won from pole at Monaco. However, the latter part of the season was frustrating for him. Continued failure led to his departure from Renault.

His next stop was Toyota. He stepped into Toyota car for the last two races of 2004. He qualified sixth in Japan but failed to score. Beginning of 2005 again brought luck to Trully. He made second places in Malaysia and Bahrain, and third in Spain. At Indianapolis he earned Toyota’s first pole position. But, in the second half, results eluded him. He finished in the points on nine occasions, getting him seventh place in the drivers’ championship. In the first half of 2006, Trully struggled for points and failed to score until round nine in Canada. He finished fourth in Indianapolis but in overall competition, finished twelfth. In 2007, he finished thirteenth. However, Toyota retained contract with him for 2008.