Here is information about the achievements of Niki Lauda in F1 championships. During his career he was considered a highly courageous racing star.
Formula 1 » Legends » Niki Lauda 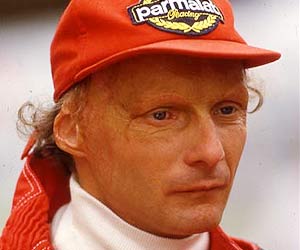 Niki Lauda has been among the most courageous racing stars. Almost dead after an appalling accident, he made a comeback to the racing track when everyone thought that Lauda's career was over. Nikki won Formula 1 title in 1975, 1977 and 1984.

Career
Nicholas was born in a wealthy family. However, he was not supported in his endeavor of making a career in racing, for they thought Nikki doing this would bring disrepute to them. But Nikki was sure that racing was his future. To learn the tricks of racing, he got himself enrolled in racing's school of hard knocks, paying for it with money borrowed from Austrian banks.

He started his career in a Minni in 1968. His second stop of Formula Two where he was quite successful. In 1971 he bought his way with a bank loan into the fledgling March team as a Formula 2 driver. Thereafter he was promoted to the F1 team. He drove for March in both F1 and F2 in 1972. However, the results were not favorable. Lauda took another bank loan and bought his way into BRM team in 1973. His big break came when one of his colleagues helped him to join Ferrari which paid him sufficient amount to clear off his debt.

Lauda justified the expectations of his team mates with a second-place finish in his début race for the team. He had hist first Formula One victory in Spain and another in Holland. In 1975 season Niki emerged victorious in Monaco, Belgium, Sweden, France and the USA to claim World Championship. Lauda dominated the first half of the season in 1976. However, he suffered a severe accident at the German Grand Prix. Only with God's grace and will power, he survived the accident. However he carried burn injuries and a damaged ear all his life. To hide the injuries, he started wearing a red cap.

Post comeback Lauda decided to withdraw from 1976 championship citing unsafe conditions, though he was leading the race at the time. This is considered one of the bravest decisions ever. However, his employer Ferrari was upset with his decision and even expressed it. Lauda answered this criticism with winning the driving title in 1977. In 1978 Nikki finished fourth in the championship. There after his motivation declined and he retired declaring that he was tired of driving around the circles and would start his own business.

Comeback
Financial needs forced Lauda to return to racing track in 1982. He joined McLaren and won the Long Beach Grand Prix proving that he had not forgotten his skills. He won a a third world championship in 1984. His performance declined in 1985. Thereafter he again withdrew from the sport.

Post F1
Nikki Lauda has now become a successful entrepreneur. He was inducted into the International Motorsports Hall of Fame in 1993.