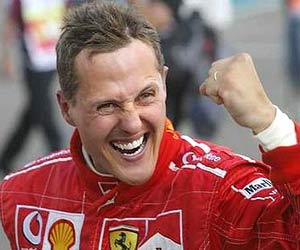 Michael Schumacher is arguably considered the best driver ever. He eclipsed the record of former Formula One champion Juan Manuel Fangio of holding five titles. When Schumacher retired, he had seven driving titles and held nearly every record in the book. After 16 seasons at the top, he was still unbeaten.

Birth
Schumacher was born on 3 January, 1969, near Cologne, Germany.

Schumacher's Records
Career
When Michael was just four, he was given a kart by his father. Thus began an extraordinary career in an ordinary way. By 1980, he began taking part in competitive karting races. During his karting days, he was deeply impressed by driver Ayuton Senna. Showcasing his talent, he on the German Junior Championship in 1984. In 1987, he claimed the European Championship. In 1990 he emerged victorious in the German F3 championship and was hired by Mercedes to drive sports cars.

Schumacher debuted in F1 in astonishing way in 1991. For the Belgian Grand Prix at Spa for Jordan, he qualified with an astonishing seventh. Next year Schumacher won his first race at Spa which was considered the toughest of circuits. Schumacher continued his exploits. In the course of next four seasons with Benetton, he won further 18 races and two world championships. There were some controversies regarding his first championship in 1994. However, in 1995, his victory was crystal clear.

Following this win, Schumacher moved to Ferrari, a combination which would reap rich dividends in future. Schumacher-Ferrari combination bagged three wins in 1996 and five more in 1997. However, the end was marred by infamy. Schumacher was accused of trying to ram his car on the vehicle of Jacques Villeneuve, his closest rival. As punishment, he was stripped of his second place in record books. Overall Schumacher was second in 1998. He suffered a crash at the British Grand Prix in 1999 season.

Schumi Express gained speed 2000 onwards. In 2000 he became Ferrari's first Formula One champion in 21 years. He went on to win the driving title for the next four successive seasons. In 2002 he emerged victorious 11 times and finished on the podium in all 17 races. He surpassed Fangio's record in 2003 when he won his sixth driving title. In 2004 he was ahead in 13 of the 18 races, thus securing his seventh championship with huge margins. Despite an off-beat Ferrari in 2005, he managed to finish second in 2005. In 2006 Schumi Express was running all around. He missed another title with very close margin.

Qualities of Schumacher
Schumacher possessed ambition, confidence, intelligence, motivation, dedication and determination, the qualities which make any great driver. He had never-ending passion for racing and always searched scope for improvement. His natural talent and racing brain combined to make the greatest driver ever.