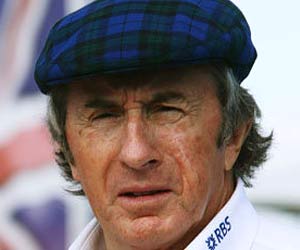 Jackie Stewart changed the way Formula 1 racing developed. Safety in F1 races is his largest legacy. Drivers learnt professionalism from him and he also played a spectacular role in exploiting Formula One racing's commercial potential. And, as a driver, he was indeed great winning the world championships of 1969, 1971 and 1973.

Birth
Jackie Stewart was born on 11 June 1939 in Milton, West Dunbartonshire, in Scotland.

Career
Jackie began his racing career driving saloons and sportscars. His performance got him a berth in the 1963 British Formula Three series. Jackie stunned everyone seven races in a row. Jackie joined the BRM Formula One team in 1965. He was with them for three seasons, winning two Grand Prix and establishing himself as a frontline driver. Partnering with Ken Tyrrell, he made Formula One his own event. At Indianapolis, in 1966, his performance was simply impressive and this brought him Rookie of the Year honours.

An accident in 1966 brought great changes in Jackie Stewart. Participating in Belgian Grand Prix, his car crashed. He found himself stranded in the car for approximate an hour. The marshals did not have the tools to help him. His fellow drivers borrowed the tools from a spectator to break car parts and pull him out. A decrepit old ambulance was somehow arranged to take him to hospital. And it too got lost. Luckily, Stewart had not suffered any major injury or the accident could have proven fatal for him.

Jackie was aghast at the lack of medical infrastructure and safety rules. He decided that he would do something about it. And he did, in the face of opposition. He was accused that he is trying to rob Formula One of its adventure. But he faced his critics, saying that not many of them would have had accidents driving at more than 150 miles/hour. Luckily, he was winning races continuously and that too on tracks considered tough. This added credibility to his voice.

Few of the things credited to him are full-face helmets and seatbelts for drivers. He helped develop medical teams that travelled to the races. He successively advocated safety barriers and greater run-off areas at dangerous corners, to protect both drivers and spectators.

Thanks to his efforts, Jackie Stewart became hugely popular. He regularly consorted royalty, politicians, movie stars and corporates. He was even invited to corporate boardrooms and became a multi-millionaire even before he retired.