Know about the racing career, records and death of Ayrton Senna here. A born genius, Senna is the only F1 champion to breathe his last on the race track.
Formula 1 » Legends » Ayrton Senna 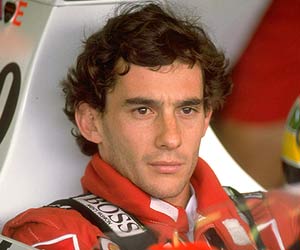 Some are born genius. Ayrton Senna fell in same category. And he remains the only Formula One champion to breathe his last on the race track as if his life had been destined by the Almighty for the track. Those who saw him driving vow that he was the greatest driver the world has ever produced. Had he lived, who knows?

Records of Senna
Early Days
Ayrton Senna was born in a wealthy Brazilian family and he enjoyed a privileged upbringing with his brother and sister. He had a penchant for races since his early childhood. When he was four, his father gifted him a miniature go-kart. At 13 he raced a kart for the first time and won the race. Eight years later he took up single-seater racing in Britain. He won five championships in three years. His dedication to the sport can be gauged by the fact that he divorced his young wife and forsake a future in his father's business to participate in car racing.

Competitive Races
Senna won the British Formula 3 championship in 1983. Next year he made his Formula One debut with Toleman. At Monaco Grand Prix, he was a sensational second, showing to the world that a genius has arrived.

Senna was a man of towering ambition. He realized that Toleman's limited resources could not support him. In 1985 he moved to Lotus where he won six races in three seasons. His next stop was McLaren. He went there in 1988 and stayed there for six seasons, winning victorious in three world championships and 35 races. In 1988 Senna beat his team mate Alain Prost eight wins to seven to get his first driving title.

Senna and his team mate Alain Prost, another great driver, fought fiercely for every title. And the two contenders had some infamous feuds too. In 1989 Prost took Senna out to get the title. In 1990 Senna paid back in the same coin. He took out Prost's Ferrari at Suzuka's first corner. Senna's third title, in 1991, was without any such controversies. He had now developed as a dominating driver, and yet, he wanted to become better. With McLaren, he produced some great performances.

Tragic Death
May 1, 1994. Ayrton Senna was leading the the San Marino Grand Prix. Michael Schumacher was right behind. Just before a lap of the race, Senna lost control of the car at 190mph, which rammed into a concrete wall. Medical team rushed to the spot and tried their best to save Senna. But to no avail. The great driver breathed his last on the track he loved so much.

He was given a state funeral and almost all of his F1 peers escorted his coffin. His arch rival Alain Prost was also with his coffin.

Personality
Ayrton Senna was the most respected driver of his times. He had an immense physical presence and could leave the people spellbound with the intensity of his voice. He was passionate about driving and had crushing desire to remain numero uno. He nurtured desire to help suffering humanity and donated millions of his fortune for the cause.

A great driver, and, a greater person indeed!