Know about the F1 career of Alain Prost, considered among the greatest drivers of all times. Achievements of Alain Prost are quite remarkable in Formula 1.
Formula 1 » Legends » Alain Prost 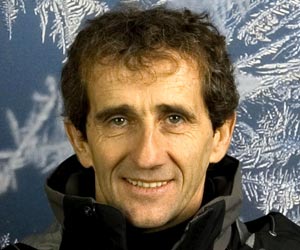 Alain Prost went about his way winning races and titles, and when he left, he was four time world champion and had most Grand Prix victories to his name. This tells volumes about the talent of Alain Prost, who, for his thinking nature, was nicknamed 'The Professor'.

Birth
Alain Prost was born on 24 February 1955 near Saint Chamond in the Loire region of Central France.

Career
Prost discovered karting at the age of 14. He won a number of titles at the motor sport's junior ranks. Then he underlined his presence in the single seaters winning the French and European Formula Three championships. At 25, he joined McLaren Formula 1 team in 1980. He scored points on his debut and won France Grand Prix a year later. However he was not happy with the way team McLaren was run and left to join Renault.

In 1983 he ended second to Nelson Piquet in the World Championship. He was runner up to Nikki Lauda in 1984. Prost won his first title in 1985. With the course of time, Prost developed close rivalries with great driver Ayrton Senna and Nigel Mansell. In 1986, he went past Mansell and Nelson Piquet to win the title. For 1988 Senna joined Prost at McLaren. Their cars collided at the 1989 Japanese Grand Prix giving Prost his third Drivers' Championship. Next year they again collided, but this time round, result was different. Prost was knocked off and Senna won the title. Prost emerged victorious in 1989 F1 season beating many of his rivals. Prost last won the title in 1993.

Approach to Sport
Prost was always a calculating person. He did not believe in sheer speed and depended on his calculation to win races. He began a race conservatively, taking it easy on the brakes and tires and then making a late charge. His main opponent Ayrton Senna was totally different. His tendency was to go flat out all the time. This made Senna more appealing in the view of general spectators.