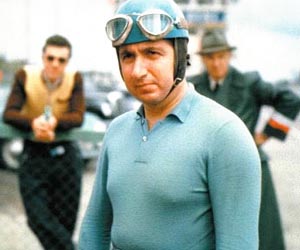 Alberto Ascari is among the best-loved champions of Formula 1 racing. Acclaimed for careful precision and accurate driving, he won F1 world championship in 1952 and 1953. This extraordinary driver was notoriously superstitious and tried his best to avoid ill-fate. And yet he failed to avoid a fatal accident, dying in unsolved mystery.

Birth
Alberto Ascari was born in Milan on July 13, 1918. He was only seven when his famous father Antonio, the reigning European champion, was killed while leading the French Grand Prix at Montlhery.

Career
Alberto began his career in bike racing. His first car foray came in the 1940 Mille Miglia, where Enzo Ferrari chose him a ride in a Tipo 815 Spyder. Start of the World War II imposed a career break on Alberto. He married, had kids and set up a transport business. When the war finished, Alberto was not eager to resume his racing career given his family responsibilities. However, his close confidante Luigi Villoresi persuaded him to continue. The duo became team mates in Enzo Ferrari's team in 1949.

Alberto Ascari was dominant in F1 racing. In 1952 he drove his Ferrari car to victory in six of the seven championship races and emerged champion. In 1953 too, he was dominant, winning five times and bagging his second successive driving title.

His charming personality combined with his superlative driving skill made for him a dedicated legion of admirers. He was a hero for his fans and they even loved his idiosyncratic superstitions. He was mindful of unlucky numbers, avoided black cats, and never allowed anyone else to handle the briefcase. A careful driver, he strictly observed self-imposed safety margins and made sure he never crossed the limits of his car or himself. And yet, he faced a fatal accident.

Death
Ascari came to Monza to watch a practice session in which Eugenio Castellotti was testing a Ferrari sports car. He decided to drive the car a few laps for he did not know what the fate had in store for him. He did not have his lucky blue helmet with him, so he borrowed Castellotti's white helmet. He set off around Monza wearing a casual trouser, tie and jacket. On the third lap the car crashed inexplicably. Ascari could not survive the accident.

His death had strange similarities with his father. He breathed his last on May 26, 1955, at the age of 36. His father was also 36 when he died, on July 26, 1925. Both father and son had bagged 13 championship Grand Prix and drove car number 26. Both of them were killed four days after surviving serious accidents. Both had died on the 26th day of the month. Both were survived by a wife and two children. Both had crashed inexplicably on easy left hand corners.