Here is information on the racing career of Juan Fangio. Records of Fangio have been phenomenal in F1 championships.
Formula 1 » Legends » Juan Fangio 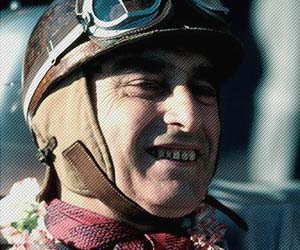 Juan Manuel Fangio is regarded by many as the greatest driver of all time. He dominated the first decade of Formula 1 racing winning the driver's title five times, and in the way making a record which stood for 46 years. And he won these titles with four different teams. Though the record of driver's title has been broken now by Michael Schumacher, the latter feat is still unsurpassed.

Birth
Fangio was born on June 24, 1911 at Balcarce in Argentina.

Fangio Records
He became World Champion five times (with four different teams) and runner-up twice.
He won 51 championship in Grand Prix races.
He began from the front row 48 times, including 29 pole positions.
He set 23 fastest race laps en route to 35 podium finishes. 24 of these culminated into victories.
When he won his last driving title in 1957, he was 46.

Career
Fangio started his racing career in Argentina in 1934, driving a rebuilt 1929 Ford Model A. He drove in Chevrolet cars and became Argentine National Champion in 1940 and 1941. Unlike most other Formula One drivers, Fangio started his Formula One career at mature age. In many of his races, he was the oldest driver. And he achieved all this with style, grace and nobility.

Fangio debuted in the 1948 French Grand Prix at Reims. He began from 11th on the grid but retired. He again appeared in Formula One next year at San Remo. In 1949 Fangio won several races against top level opposition. At first Formula One World Drivers' Championship in 1950, Fangio performed impressively but title was taken by Giuseppe Farina. However, in 1951, it was all Fangio. This was the first time he won Formula One driving title. Year 1952 was not favorable for Fangio. He was injured in a track accident and spent most of year recuperating. In 1953 Fangio finished second in the championship.

It was boom boom Fangio from 1954 to 1957. He won six out of eight races in F1 championship in 1954. He emerged victorious in 1955 too, though his win was marred by a disaster in which more than 80 spectators were killed. This made his team Mercedes-Benz withdraw from racing. For 1956 Fangio moved to Ferrari and took his fourth title.

Greatest Drive Ever
Fangio had saved his best for his last year in F1 1957. For the season he returned to Maserati. He began the season with successive wins in Argentina, Monaco and France. However, in Britain, engine problems forced him to retire. At the German Grand Prix, Fangio needed to extend his lead by six points to claim the title with two races to go. In the final event Fangio was on lap 13 with a 30-second lead, but a disastrous stop placed him in third place and 50 seconds behind Collins and Hawthorn.

People thought that Fangio was out but the Maestro had different plans. The genius came into his own, setting one fastest lap after another, finishing in a record-breaking time on lap 20. It was a full eleven seconds faster than the Ferraris. On the penultimate lap Fangio surpassed both Collins and Hawthorn, and claimed his fifth title. This amazing performance is regarded as the greatest drive ever in Formula One.

After Formula 1
Post retirement Fangio used to drive former race cars in demonstration laps. Fangio was appointed President of Mercedes-Benz Argentina in 1974, and its Honorary President for Life in 1987. Cuban rebels kidnapped him to propaganda their cause on February 23, 1958, but later released him unharmed. He was inducted into the International Motorsports Hall of Fame in 1990.

Fangio breathed his last in Buenos Aires in 1995, at ripe age of 84. He is yet remembers by the Argentinians as one of their greatest sportsmen.