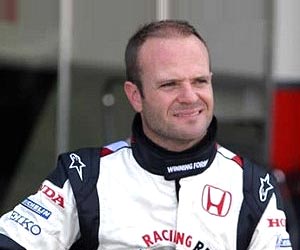 Ruben Barrichello, currently associated with Honda, is a Brazilian F1 racing driver. He was born on May 23, 1972 in SŃo Paulo, Brazil.

Professional Career
Like most racers Ruben Barrichello also started his career in karting. He finished third in his first kart race, second in his second and first in his third. Over the next eight years, Barrichello bagged five Brazilian titles, was named the 1986 South American champion and came ninth in the 1987 world championship. Barrichelloĺs increasing reputation brought him a Formula Ford drive in 1989. He moved to Europe, winning the 1990 Opel Lotus Euroseries. In 1991 he won British Formula Three championship. He finished third in the 1992 Formula 3000 series.

Jordan offered him test drive in 1993. Ruben performed so well that Jordan offered him a race seat. Despite retiring nine times in his debut season, Ruben scored two championship points. Next year, a serious accident at Imola prevented him from taking part in the competition. He also faced the tragic death of friend and mentor Senna. Yet he scored his first podium finish that season with a third place at the Pacific Grand Prix. Despite staying with Jordan for another two years, he failed to achieve anything particular. In 1997, he decided to leave Jordan.

He now joined Stewart on a three year deal. He had great qualifying performances but the car was unreliable. Barrichello had just two Grand Prix races in his first season with Stewart, though in Monaco Grand Prix, he attained spectacular second place. His last year with the Stewart was good in terms of points, but unable to grab any wins, he decided to leave Stewart and join Ferrari to team up with Michael Schumacher.

Ruben was overshadowed by Schumacher. Yet he had no regrets. In 2000, he won Germany Grand Prix. He repeated the achievement eight times. With Ferrari, Ruben had his rewards. He was rewarded with a championship-winning car and twice he finished runner-up in the driversĺ championship. Ruben acted well as Schumacherĺs number two.

In 2006 Ruben decided to head for Honda. He clinched fourth place at Monaco and seventh in the driversĺ standings. However, overall, his stint with Honda was not fruitful. With Honda, for the first time in his career, he finished a Formula 1 season without scoring a point. What Ruben does next is something everybody is watching with anxiety.