Here is information about career of Nico Rosberg in Formula 1. During his F1 career, he successfully followed the footsteps of his father who was also a good driver.
Formula 1 » F1 Drivers » Nico Rosberg 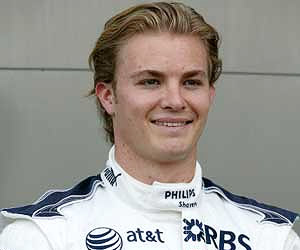 Nico Rosberg, a F1 driver, holds dual nationality from Germany and Finland. He was born on June 27, 1985. He has successfully followed the footsteps of his father Keke, 1982 Formula 1 world champion. Not many people know that Nico is also a good player of tennis. However, he decided to make a career in motorsports.

Professional Career
Nico started karting at an early age of six. In five years, Nico won several regional, French, and international championships. Then he switched to single seat racing. Just at the age of 17, he exploited Formula BMW and took nine victories from twenty starts. Recognizing his talent, BMW Williams gave him the chance to test drive in 2002, making him the youngest person to drive a Formula One car. Thanks to his performance in Barcelona, he got two further runs with the team, one in December 2003 and the second in January 2004. Rosberg moved to Formula 3 Euroseries in 2003. He proved his worth with several wins in his two seasons. In 2005 he joined the ART squad to participate in new GP2 series. He took five wins in the series and emerged victorious.

Williams offered him a Formula One race seat now with Mark Webber as partner. In his debut Grand Prix in Bahrain Rosberg finished seventh justifying the faith shown on him by his employers. He also recorded the fastest lap of the race. Rosberg is fast learning tricks of the trade on the highest level. He had learnt that just raw speed was not enough to emerge victorious in Formula One. Although his performance was impressive, he had his share of mistakes too. In 2007, Rosberg looked a much more complete package. Scoring most of Williams' points, he outpaced veteran team mate Alex Wurz. At the final round in Brazil, he took the fourth place. Experts predict that Rosberg would one become a big motorsports star.