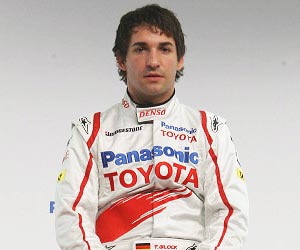 Tim Glock has taken forward the German tradition of producing efficient F1 race drivers. He was born on March 18, 1982 at Lindenfels in Germany.

Professional Career
Tim Glock started his racing career in karting. In short duration of three years, he made a name for himself. Now he turned to cars, participating for the first time in the Formula BMW-ADAC series. The German grabbed the junior cup in his first year, and in the following season, bagged the main championship. His exploits earned him a place in German Formula 3 in 2002. While debuting, while driving for Opel Team KMS, he scored three wins and six podiums. Next season Tim moved to the Formula Three Euroseries. He celebrated with three wins and finished fifth overall. Impressed by his performance, Jordan signed him for Formula One as third driver.

Glock performed successfully as test driver. Then he was called in to replace race driver Giorgio Pantano. With fellow German Nick Heidfeld he made his Grand Prix debut in Canada and finished. After Pantano's departure, Jordan signed Glock to take part in the remaining races. Tim proved himself worthy of a permanent Formula One seat. However, the opportunities were few and Tim decided to shift to America to compete in the 2005 Champ Car series.

Glock now decided to try and get a break in the innovative series which was regarded as the best feeder for Formula One racing. Tim emerged victorious on two occasions in his first year of Grand Prix Two. Thanks to this performance, he got F1 test drive with BMW Sauber. Glock persisted with Grand Prix 2 in 2007. Driving for iSport International, he clinched five victories. This success earned him a place as Ralf Schumacher's replacement with Toyota for 2008 season. He scored his first points of year 2008 in the Canadian Grand Prix.